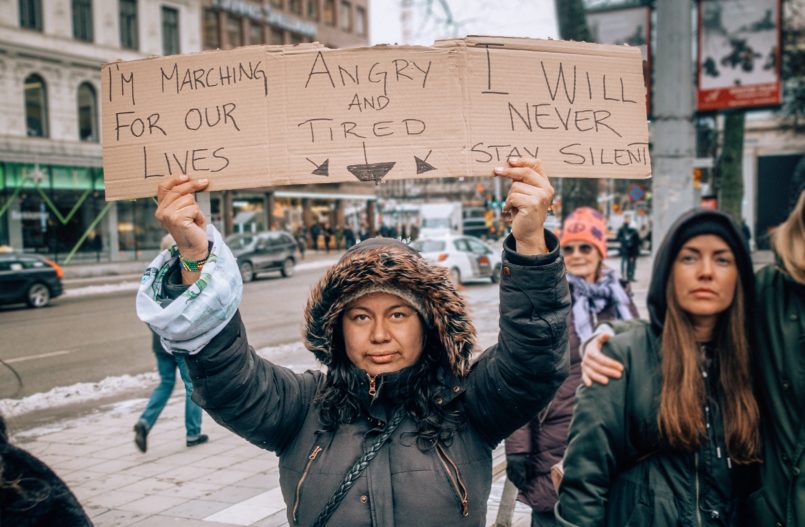 In the first of an ongoing series examining the media’s “blind spot” towards gender, race and class, Digital Women UK asks Bidisha about media attitudes towards women and the role social media might play in ensuring women’s voices are heard.

How would you define the media’s blind spot?

I call it cultural femicide: the erasure of women from public life. We are completely under-represented as experts, artists, speakers, innovators, creators, spokeswomen, scientists, leaders, politicians. When we are featured, it is as objects – either modelling or being guinea pigs in fashion, hair, beauty makeup and fitness features, or as dead bodies – victims of endemic male violence, rape, abduction and so forth.

Issues of rape and domestic violence, which are endemic, are ignored or underplayed, or, worse, play into rape myths which excuse perpetrators, blame victims and propagate the completely incorrect idea that false allegations of male sexual violence are rife. I think this is an overtly misogynistic, malicious tactic. There is also a blind spot behind the scenes: the paucity of women in the media in senior roles, especially in newspapers; the persisting pay gap; and the casual sexism which I have seen with my own eyes.

What do you think of media coverage of women’s issues?

While things are very slowly changing as the media wakes up the the sheer heat of women’s feminist voices, the traditional coverage of issues affecting women has been deeply misogynistic. The most misogynist tactic is simply to ignore women as though we don’t exist, or severely under-represent us as though we do not play a full and wholly exploited and undervalued part in the working, social, cultural and political life of the country.

The next tactics along are simply to sneer at and undermine women, and to treat the things which affect us – sexual harassment, sexual violence, economic inequality – as though they are minor or a ‘women’s issue’ instead of something the whole world or nation is affected and concerned by. Many so-called women’s issues are actually men’s issues as the perpetrators of the sexual violence, harassment, objectification and violation are men, not women – so I don’t understand where the phrase ‘women’s issues’ really came from… oh yes I do: the perpetrators’ male apologists.

How have you encountered this blind spot as a journalist?

Typecasting and stereotyping are always an issue, in race as well as gender, although I should point out that I am a women’s advocate and believe that, in the limited time and space I have, I want to stand alongside women and support other women’s work, because the discrimination is so strong. I wish I could put into words the sheer waves of hostility, unwillingness, anger and resistance I have encountered when talking to TV, radio and newspaper editors/commissioners (some of whom are themselves women) and I recommend more than one or two women out of a list of ten.

We live in an intensely misogynistic culture – and misogyny’s great triumph is to have completely infected women. This internalisation of self-hatred, hatred of other women and grovelling towards men really bothers me.

What do you think are the challenges for people working in the media – women and men?

A lot is changing now, down to a combination of the digital revolution, which has flattened out the authority of the media, and also led to the expectation of free content and free labour and the global recession which has affected ad sales. Newspapers and magazines are closing or losing pages due to falling readerships or falling investment from advertisers; meanwhile, our own habits are changing as readers/viewers. We are no longer loyal to one outlet or regard it as the voice of authority.

Journalism is becoming de-professionalised: I make most of my income from presenting at live events at arts festivals nationally and sometimes internationally, but a lot of the journalism I do – and all of the activism – is done entirely for free. I don’t mind that, as such, but it does highlight the fact that journalism is no longer a profession and is down to people who already have full-time jobs working additionally, or to people who (like me) have had long careers, savings, established lives etc and therefore are not relying on journalism income. Either way, it’s unsatisfactory, labour-exploitative and class-exclusive. As a woman and a feminist I think we have to keep on challenging the discriminators, keeping up the pressure, keeping on counting (how I hate the counting…) and publicising the results. Discriminators of both sexes hate women, but they hate public scrutiny even more.

What role does social media play in challenging the media’s blind spot?

I am no fan of Facebook at all and like many people I’m ambivalent about Twitter: of course I like a buzz and an instant response but there’s an unfortunate repetitiveness and compulsiveness about it that, as a journalist, actually prevents me from going away and finding the mental space to craft a substantial article which contains original analysis and isn’t just a net of links to other people’s work. However, I think that social media in the form of online archives and research, blogs and webzines, activism and consciousness-raising – whether we are talking about The F Word, The Everyday Sexism Project, Hollaback or whatever else – have been instrumental in pushing forward women’s lived experiences, in showing our research and in demonstrating just how many capable, talented, dynamic and vocal women there are out there.

Discriminators always backed up their undermining of women by saying that we are (in any field) absent, shy, unwilling, unproductive, scarce, unconfident and so on and so forth. These are lies used to justify abuse. The sheer numbers of women participating in social media not only as activists but also as reporters, authors, artists, musicians, collectives, filmmakers and much more shows how pathetic those excuses are. However, I am alarmed by the way the ‘freedom’ of the Internet has led to the idea that content should be free and that people who make it, whether it is a piece of research, a short story, a political campaign, a book, should be working for free.

Women’s labour has been taken and exploited for 5,000 years. I believe that we deserve to be paid, credited and rewarded for our talent just as men are. Social media is a great antidote to the media blindspot – but basic human respect for women must now come right into the mainstream and be normalised because we are human beings after all, not some kind of strange, minor, outlying entity. That begins with giving women a place at the table so we can be heard.

Bidisha is a writer, critic, filmmaker and BBC TV and radio broadcaster specialising in social justice, international human rights and the arts and culture. She is a 2013 International Reporting Project Fellow, working with the Gates Foundation to cover global health and development issues. She is also a trustee of the Booker Prize Foundation. She writes for The Guardian, The Observer, the FT, the Huffington Post and the Evening Standard and has judged the Orange prize, the John Llewellyn Rhys prize and the Somerset Maugham prize, among others. She is the author of two novels, Seahorses and Too Fast to Live, the travelogue Venetian Masters and the internationally acclaimed reportage Beyond the Wall: Writing a Path Through Palestine. Her fifth book, Asylum and Exile: Hidden Stories of London, was published in 2014. She is also a trustee of the Booker Prize Foundation, looking after the UK’s most prestigious prizes for literature in English and in translation. She was chair of judges for the 2018 Forward Prizes for poetry and directed her first short film, An Impossible Poison, which premiered in Berlin in November 2017.