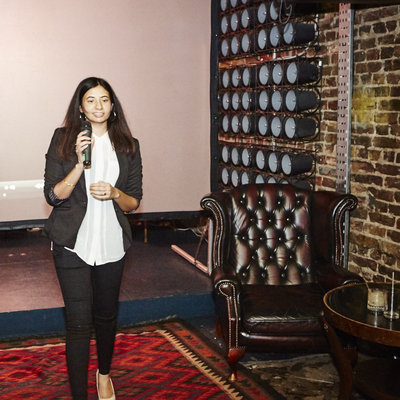 In one form or another storytelling has been a constant theme throughout my professional career (and life). But I wasn’t always involved in digital storytelling in the way that I am today. Mainly because when I was starting out, opportunities around digital technology didn’t exist in the same way.

My professional career began when I started writing for The Face magazine (one of my first interviews was with MS Dynamite who had just dropped her first single Boo). I then went on to regularly contribute to The Guardian and various culture and style publications such as Touch, Echoes, Blues and Soul and Urban Music Magazine.

But my love of words was not confined to the page, and before long I found myself performing as a spoken word artist and promoting hip-hop and poetry events in cafes around East London.

It was 2000. I was 16 and the East London gentrification and hipster invasion was yet to happen. Also yet to happen was the digital revolution and the launch of platforms which today have become part of people’s everyday lives, such as YouTube, Twitter and Snapchat.

A few years after I began writing, I became marketing manager for the Raindance Film Festival, aged 19. This really sparked a fascination for telling stories through film, animation and moving image.

Having already explored the art of storytelling through journalism, poetry, music (mainly hip-hop which has given the world countless talented poets), and moving image, it made sense for books to be the next stop on my professional journey.  So I embarked on a career in publishing.

I’ve spent the last eight years working in book publishing. Ironically, as many books do, I started off at a literary agency Peter, Fraser and Dunlop (PFD) and then went on to work at publishers, starting with one of the biggest international publishing houses (Penguin Random House) before moving to an independent political radical press (Zed Books).

As a working class second-generation Asian woman born and bred in Bow E3, I was always aware that I wasn’t the usual ‘publishing type’. Yet I managed to work my way up from being a contracts administrator to online/digital account manager.

I ended up being charged with looking after big accounts, such as Apple and Google, and delivered digital strategy for some of the biggest international bestsellers and authors.

So my career to date has been varied and has spanned many areas. But despite everything I’ve done, storytelling has always been at the heart of it all. And while I was exploring different forms of storytelling, the digital revolution was happening.

Our smartphones got smarter. New technology created new opportunities and there continues to be endless possibilities in the way we can tell, share, hear and experience stories. This being the case, coupled with the diverse experience I gained over the years, it made sense for the next step in my journey to be for me to start my own venture – OWN IT!

OWN IT! is a storytelling lifestyle brand, telling stories across books, music, fashion and film. I founded OWN IT! because I wanted to be at the forefront of innovative storytelling, and to use the opportunity of digital to find fluid new and innovative ways to do what, as humans, we’ve always done.

Sharing stories is one of the oldest forms of entertainment and has probably been around as long as humans existed. After all, long before the digital revolution, our ancient ancestors shared stories through rhythm and oral traditions.

This is what led to the vision of OWN IT! as a platform that is bigger than an organisation which releases just one type of story, like a publisher only releasing books or a record label only releasing music.

OWN IT! doesn’t restrict itself, or the artist and authors we work with, to one form or format. Instead, we aim to bring stories to every part of people’s lives, whether that is through multi-media digital books, animated songs or six-word stories on t-shirts.

In the case of our latest release, DON’T BE ALIEN, we do all of the above in one project. DON’T BE ALIEN is one story told across multiple media including a song (sung by Call Me Unique), animated video (Ewan Green) and book (Cuba and Ewan Green). The project started as unrecorded lyrics and composition written by songwriter Cuba, and grew into a creative collaboration from there.

You can hear the song, watch the video and experience the story here:

DON’T BE ALIEN is available to buy as a digital book (which consists of the song, animated video and behind the scenes material) from Apple iBooks and the OWN IT! shop.

For those of you who just want a listening experience it’s also available to buy as a stand-alone music single from Apple iTunes and the OWN IT! shop.

So whether we’re talking about the earliest civilisations or the most tech-savvy among today’s younger generation, I believe the need to be able to express our own thoughts, and engage with the ideas of others, exists in our DNA.

Crystal Mahey-Morgan began her career as a freelance journalist at the tender age of 16, writing for publications such as The Guardian and The Face magazine. While still 16, she promoted a series of open mic events which were a fusion of hip-hop and more conventional forms of poetry, and was a performance poet herself. At 19 she was the marketing manager for the Raindance Film Festival and after graduating from SOAS University, she embarked on a career in publishing, firstly working as literary assistant at Peter, Fraser and Dunlop (PFD), then joining Random House in 2009. Her most recent role at Penguin Random House was online/digital Account Manager where she was responsible for managing digital retailer relationships with the likes of Apple and Google. Mahey-Morgan also conceived and delivered the creative publishing strategy for Jamal Edwards’ pioneering and game changing book, which went to number one in the Apple paid for charts, and successfully engaged a 16-24 year old audience. She resigned from Penguin Random House at the end of 2014 and a year later Mahey-Morgan founded OWN IT!,  a multi-media lifestyle brand telling stories across books, music, fashion and film.